Barra - With the Twin Otter to the beach

Published by CaptainRed on December 09, 2017 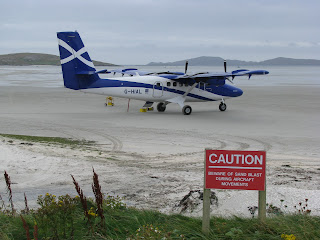 Barra, a small island in the outer Hebrides of Scotland towards the North-West of the Scottish Mainland with a population of just around 1000 people. For an aviation enthusiast this island is remarkable for its airport, which is only one of two airports in the world where the planes land and take-off directly on the beach. Definitely something special and reason enough for me to pay a visit to this place.

There are usually one or two daily flights from Glasgow International to Barra, operated by the Scottish company Loganair. The schedule varies though since it is dependent of the tides at the beach (you don't want to land in the water at high tide, do you?). And to make things even more interesting, a de Havilland Canada DHC-6 plane is used for this flight, also commonly known as the Twin Otter, certainly a special and rare plane type, at least in Europe.

Alright, so after some searching around I finally decided to book this flight for a Sunday morning out of Glasgow at the end of September 2015. Just for the experience and to see a bit more of Scotland I decided to then take the Ferry to Oban and from there with the train back to Glasgow. To get myself to and from Glasgow just a couple of simple Ryanair and easyJet flights did the trick, nothing to write home about. This blog post will focus on the Loganair flight to Barra:

After a quiet night in a small hotel in Paisley, the town right next to the airport, I took the bus back to Glasgow International: 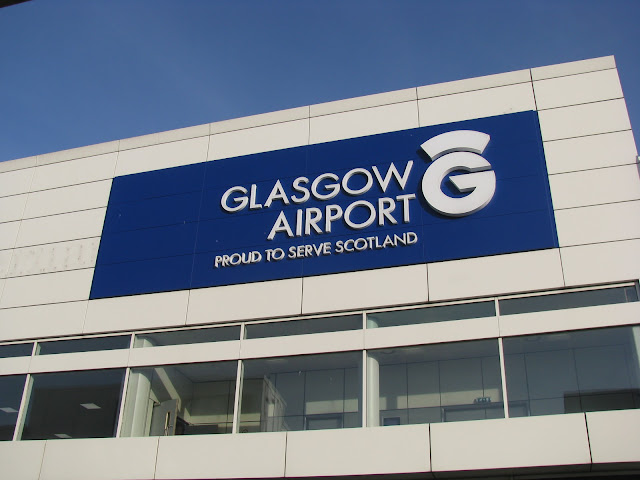 Still early enough to do some plane spotting from the terminal building:
On the way to the gate I saw this cutie, a Twin Otter in Sottish colours and hoped that it would be my ride to Barra: 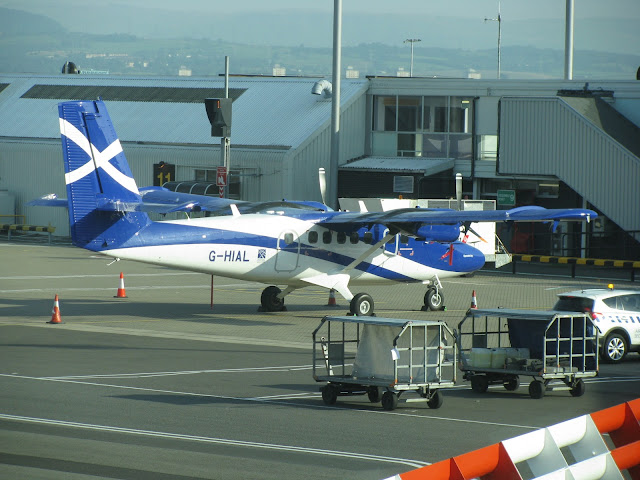 And indeed it turned out to be the flight to Barra. G-HIAL would have the honors today, one of three Twin Otters in Loganair's fleet. Boarding started a little late, but nothing serious, and then it was time to walk out on the apron to board the plane: 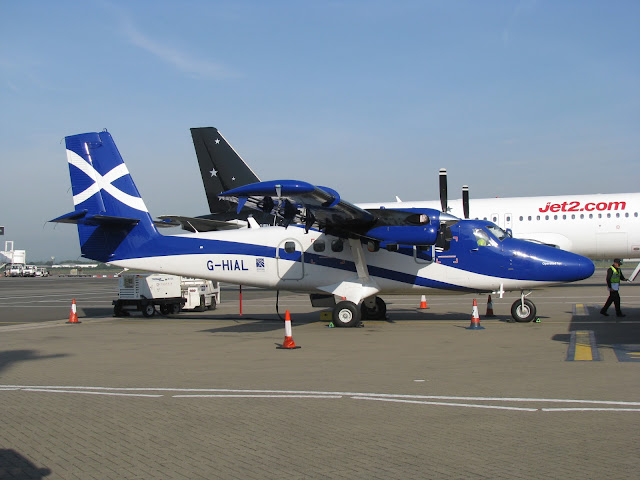 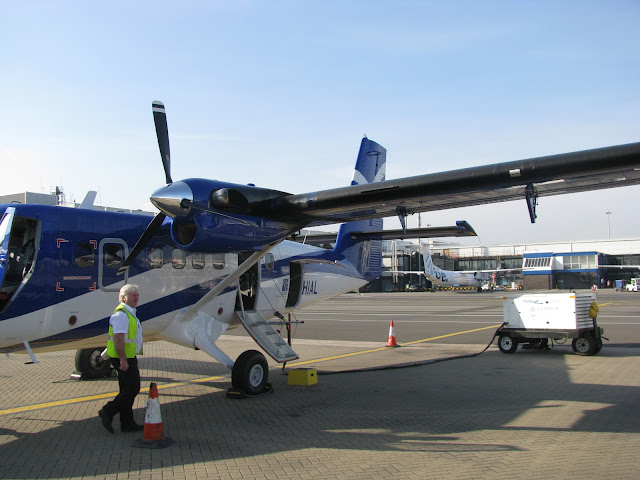 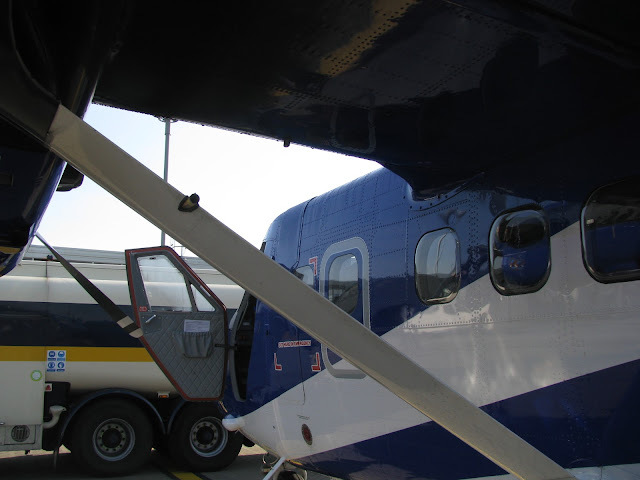 Settled down in my seat 4A, while the First Officer was doing the preparations for the flight. The Twin Otter has in total 19 passenger seats, arranged in a 1-2 seating: 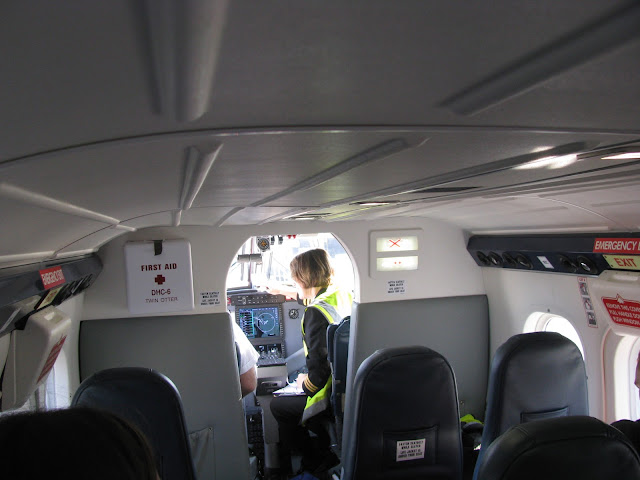 Boarding was soon completed, a relatively low load on this day. Engines started, pretty noisy as expected, and on the way to the active runway: 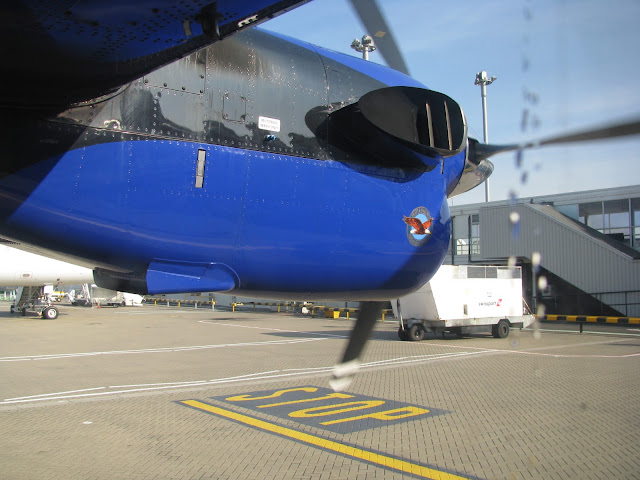 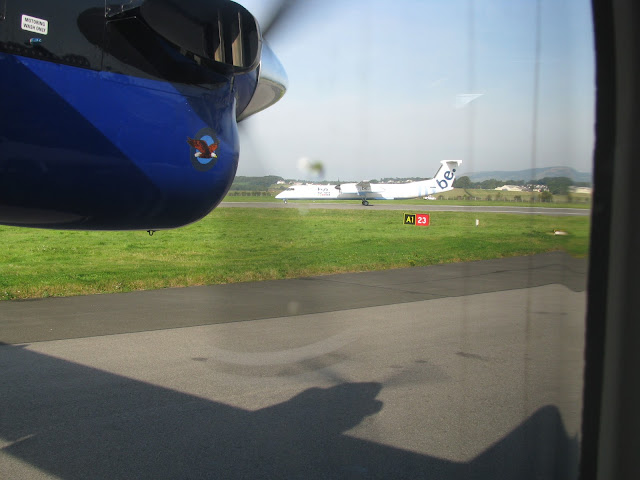 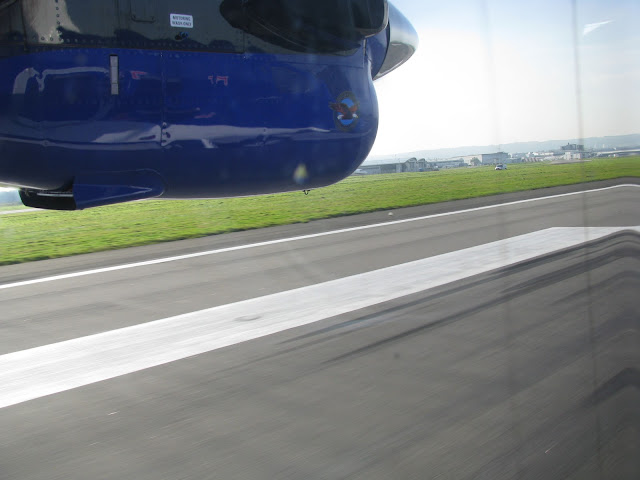 "Cleared for take-off, runway 23" Interesting to note that the throttles are actually in the top panel on this plane (and of course great to have a view into the cockpit) : 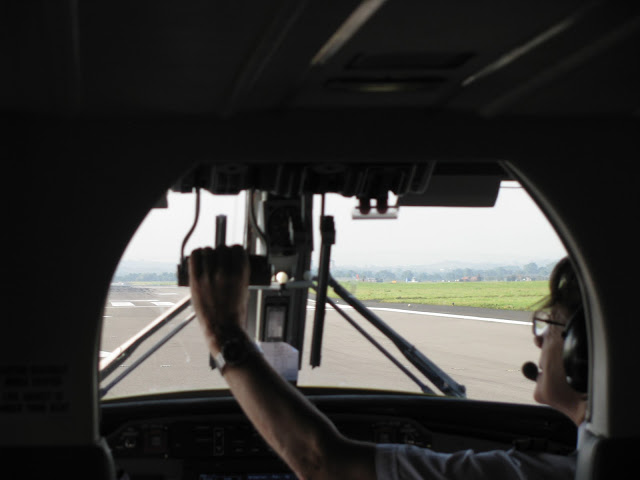 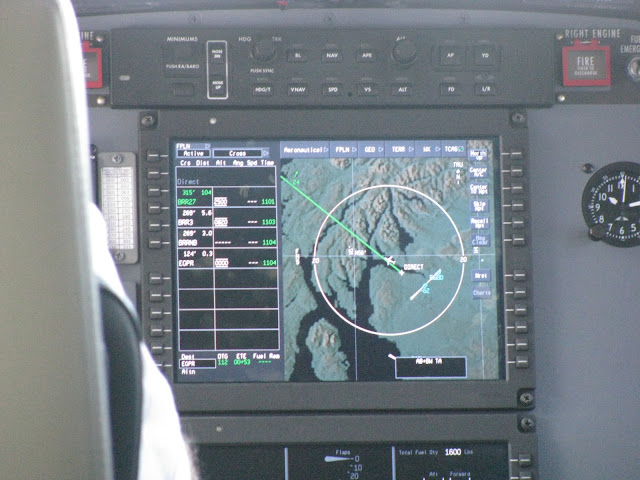 Great views on the way, over the western highlands, the Isle of Mull, then across the sea toward the outer islands:
A ferry by Caledonian MacBrayne, I took this way to return to the mainland the day after. And as you can see by the white caps on the sea, it certainly wasn't your nice and calm cruise: 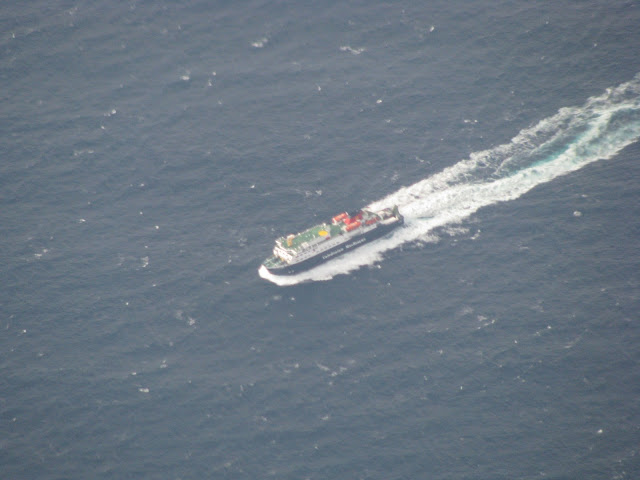 After a flying time of a little less than one hour descent started, first over the sea, then the island of Barra came into sight. It was getting a bit cloudy by that time, and also a little hazy, so views weren't perfect, but still pretty nice: 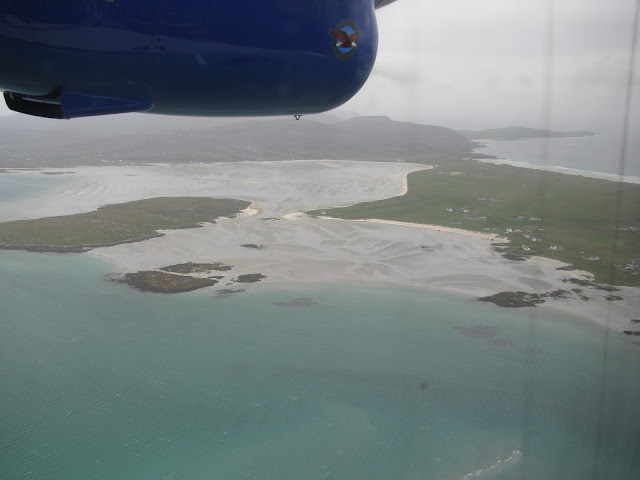 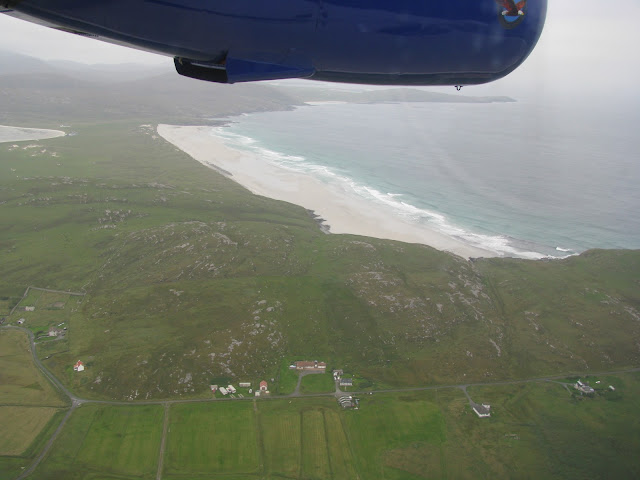 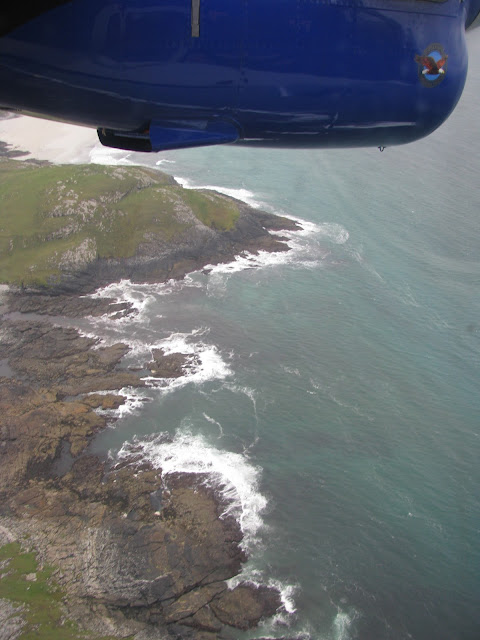 Adjusting the throttles on final approach: 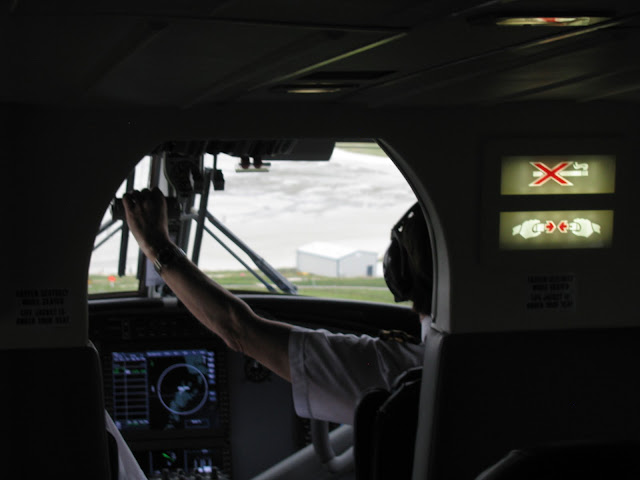 Already over the runway beach: 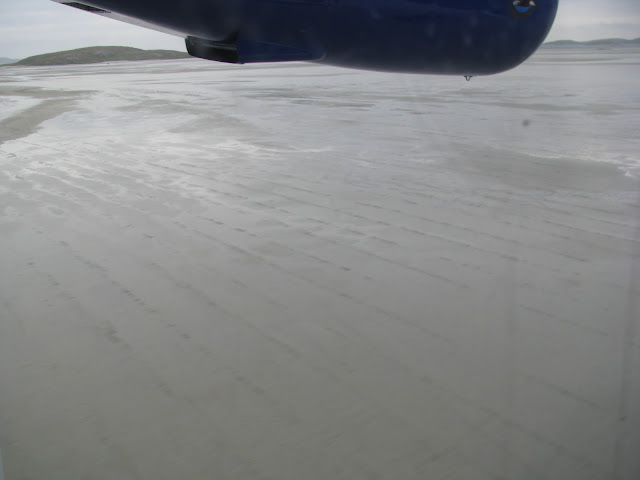 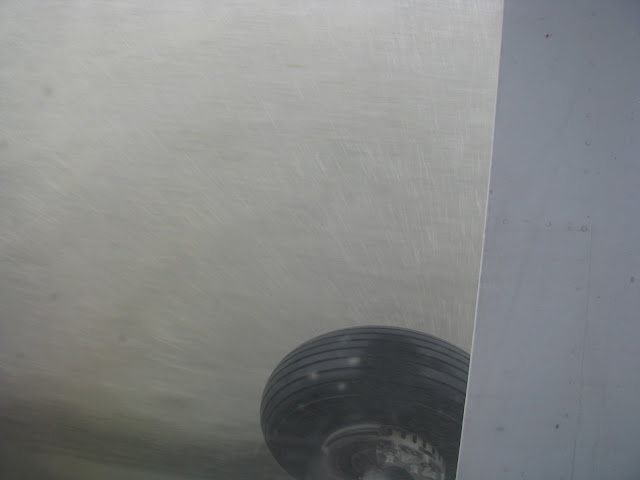 Only a short taxi time later we were at our parking position and the door was opened. I was the last passenger on board and of course - being on such a special plane - I asked for a quick look into the cockpit. No problem here: 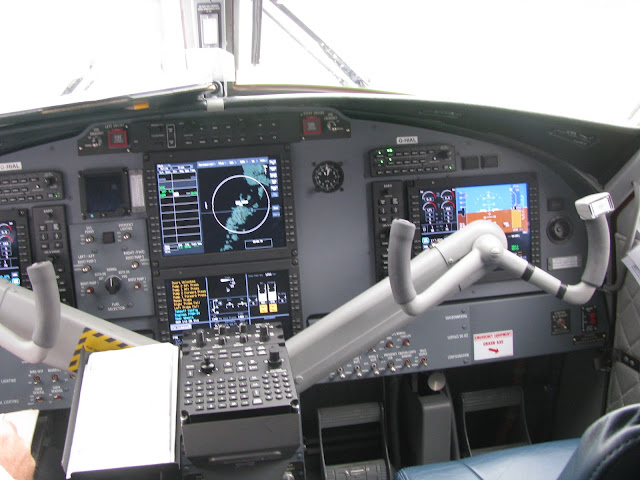 I thanked the pilots for the great flight and stepped outside as well onto the sand and into the windy Barra air. The plane at its position on the beach: 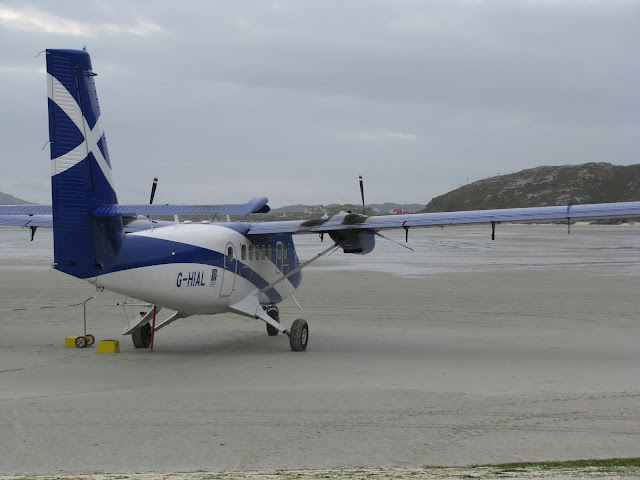 A few meters walk across the beach and you can the enter the terminal building with the cute tower and a quite impressive fire station, given the size of the place: 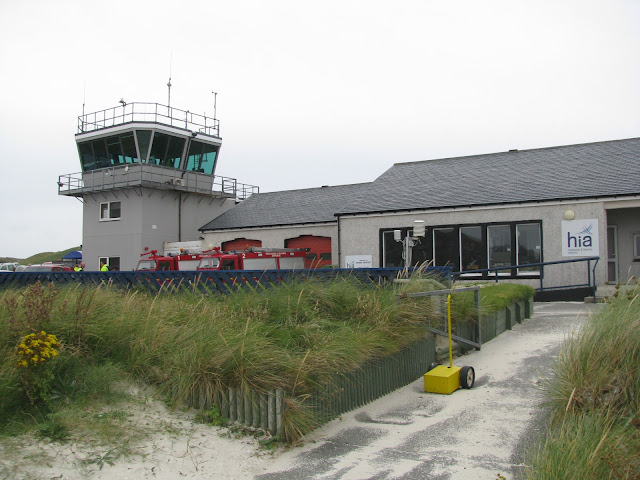 The main hall of the airport doubles as a café, and since it was a Sunday it was quite busy. Apparently people from the island like to come out here for a snack and the afternoon tea, while watching the Twin Otter land and depart again. I travelled only with carry-on, but still wanted to check out the baggage claim area. This way please: 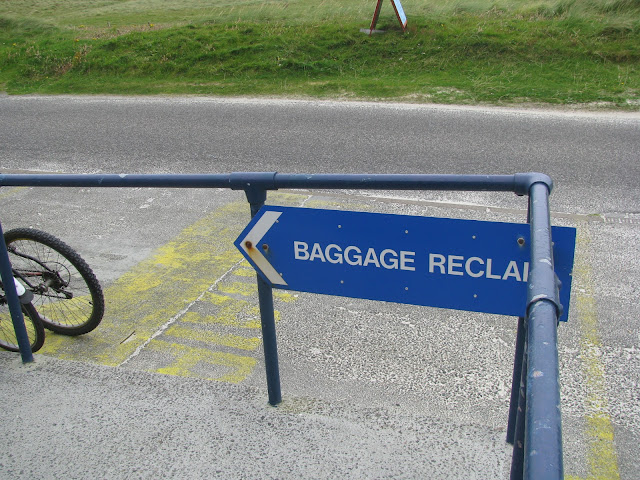 And there it is (maybe doubles as the bus station?): 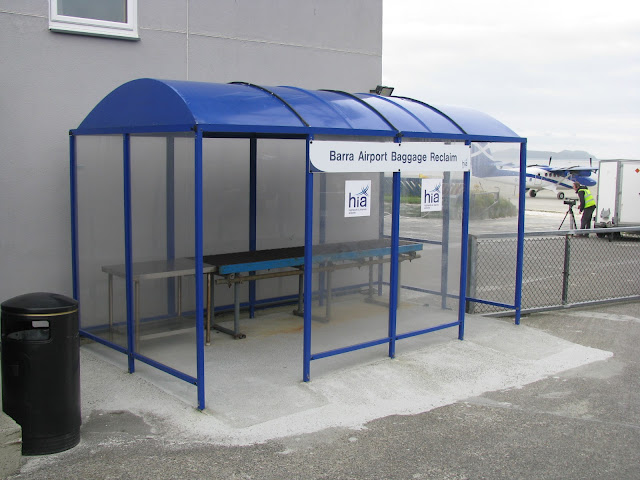 Well, talking about the bus, I read beforehand that there is supposed to be a bus service from the airport to Castlebay, the main town on the island, and it should be synchronized with the flight schedule. So no problem I thought. However I didn't read the fine print: 'No service on Sundays'. Ok, has to be a taxi then, but no taxis in sight. Asked at the café and the lady handed me a piece of paper with a number to call for a ride. Done so, but no success, only the answering machine was on the line.

Hmm, so what to do now? I didn't really fancy a two-hour-long hike in this windy weather. Well then, let's try to hitch a ride. I put on my best friendly smile and asked a couple of guests in the café and for sure, already the second guy I asked directed me to two elderly ladies, which were about to depart and they would take me with them, no problem at all. And they even took the scenic route to show and tell me a bit of their island, very nice :-)

And with one last picture of the Twin Otter already lining up on the beach runway for the return flight to Glasgow I will conclude this report. This flight to Barra is a truly unique and wonderful experience, definitely a must do for every aviation enthusiast. 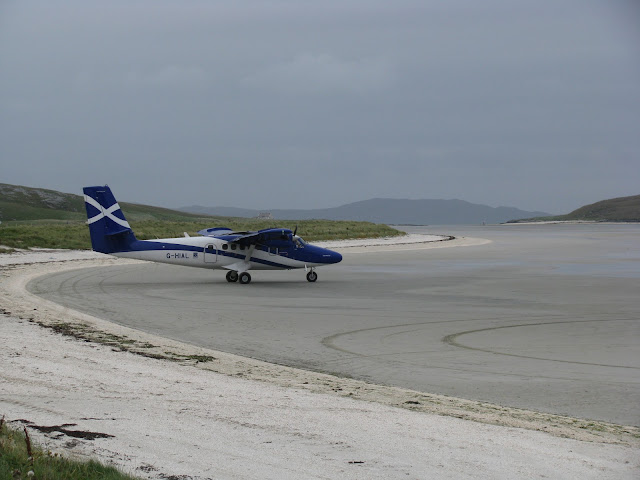 And that's it, hope you enjoyed reading this story. Next post will probably be about my stay on the island and the return journey via ferry and train back to Glasgow. Stay tuned!