Published by CaptainRed on February 03, 2018 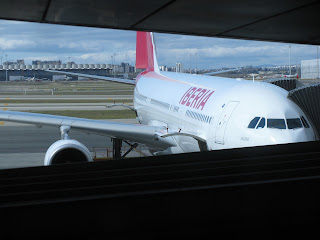 Sometimes when opportunity strikes in the form of great air fares on crazy routes you just can't let it pass. It was back in late 2015 when British Airways came up with a really cheap double open jar flight from Lyon to Kuala Lumpur in Malaysia via Madrid and London, and the return from Singapore to Madrid, also with a stop in LHR. And all this for just a little more than 300,- Euro! To add to the excitment the two longhaul legs would be operated by the Boeing 787-9 and by the A380, two new plane types for my log. So I didn't hesitate very long and booked this journey for February 2016.

It was then to get flights to connect the dots, a short hop by Hop! (pun intended) from Strasbourg down to Lyon and a cheap Iberia Express flight back from Madrid to Stuttgart did the trick. To get from Kuala Lumpur to Singapore the easiest way would have been to just book a nonstop flight, there are plenty of airlines on this route, but I wanted to do something more interesting. So why not add a new country for me to the journey, Indonesia. Air Asia had a good fare to Denpasar on Bali, and from there tigerair won my business to get me to Singapore.

This was quite a journey so I will split this report into more sections. This first blog post will cover the flights from Strasbourg to London, so to say the prelude of the journey.

The day of departure finally arrived, it was an early afternoon departure out of Strasbourg airport, just about a one hour drive from my home. The main entrance of the terminal building: 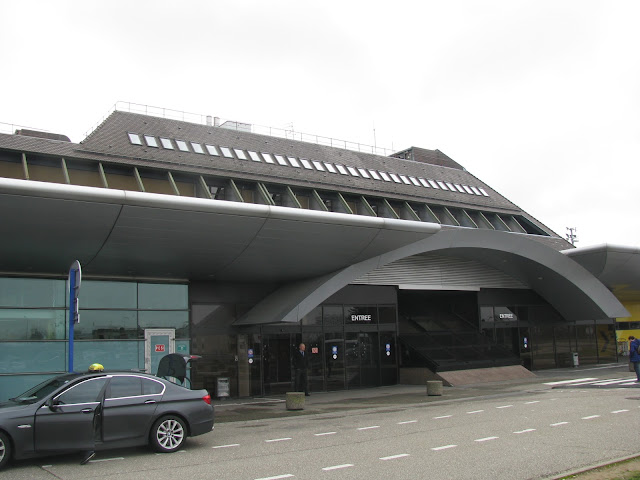 Not a lot was going on there. A couple of domestic flights within France and, quite interesting to see, this little ATR from CSA, operating a flight to Prague: 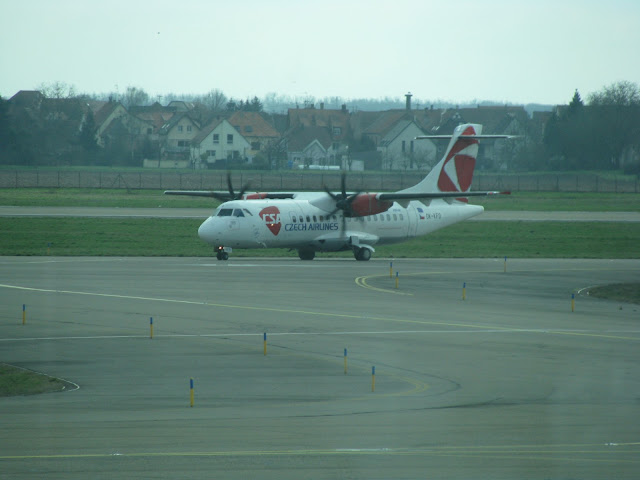 "My" plane to Lyon, the CRJ700 as scheduled, registered as F-GRZJ, built in 2003 and all this time flying for Air France or one of its partners. 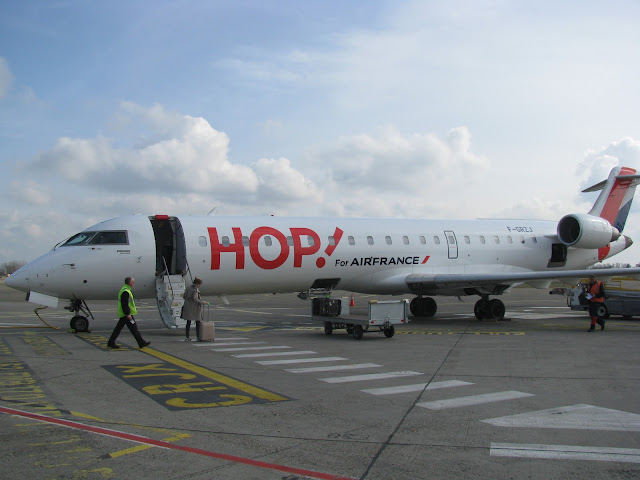 I travelled with carryon luggage only, but my bag didn't fit in the overhead bin on this small plane though. No problem, it got carried for free in the hold, other passengers had the same issue it seems: 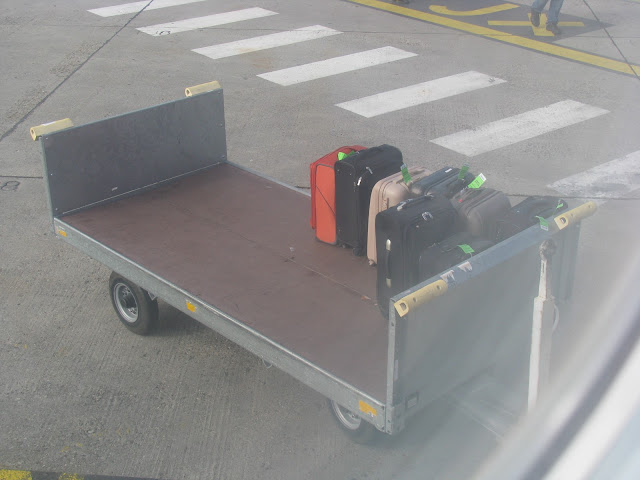 Ontime departure then. The airside part of the terminal building in SXB: 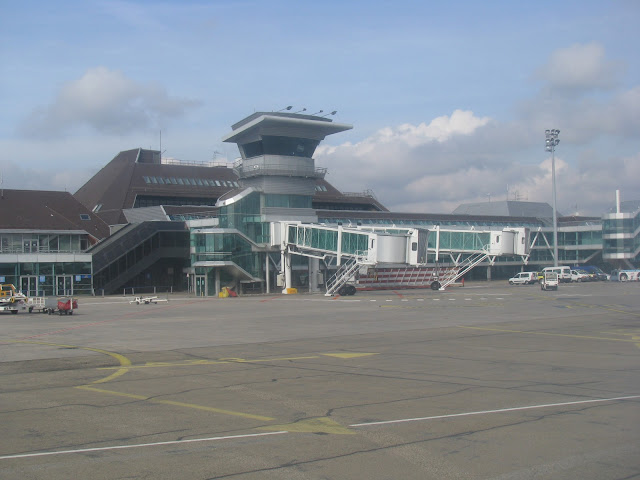 And up in the air from runway 23:
The flight passed quickly, only a mere 45 minutes in the air. Already during descent, Bugey nuclear powerplant in the distance: 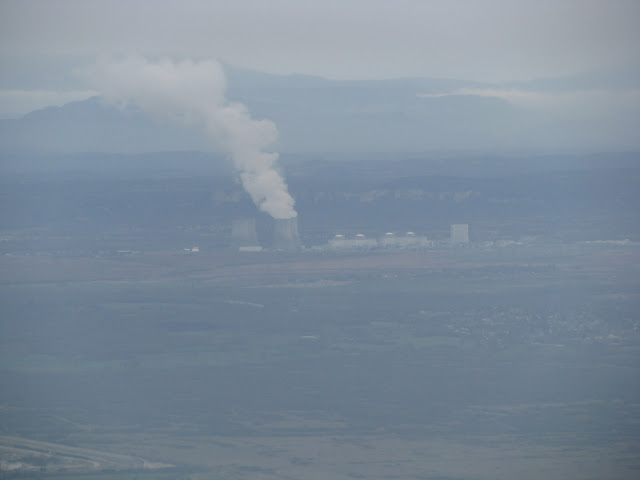 After landing we taxied past these planes, a Lufty airbus and, nice to see, a Fokker 100 from German airline Avantiair:
...before we parked at the small terminal annex for domestic flights here with a lot of Hop!s: 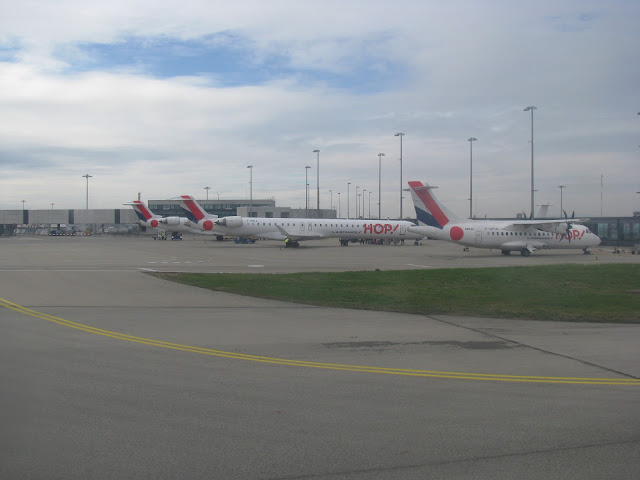 Now with an early departure to Madrid the next morning I decided to spent the night at an airport hotel. The ibis budget, nothing fancy, but a clean bed and a shower was all I needed. The free shuttle was a big plus even though it was just a ten minutes walk to the terminal. First I wanted to head into the city for the evening, but the ridicoulous cost of 27 Euro for the direct train connection and the cool and windy weather made me skip this idea. The landside of the airport here: 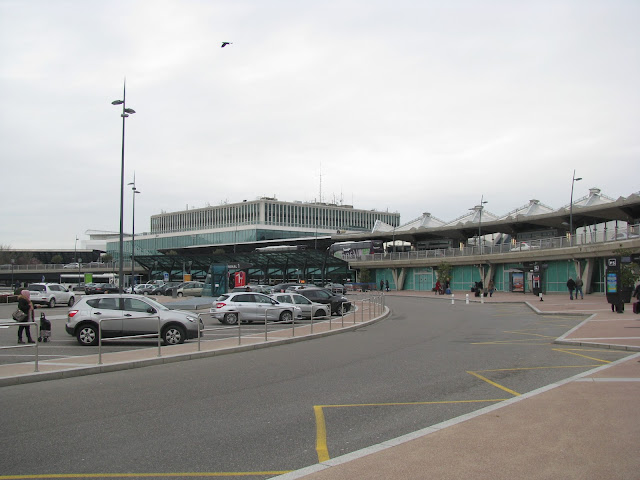 And the train station in a rather futuristic building: 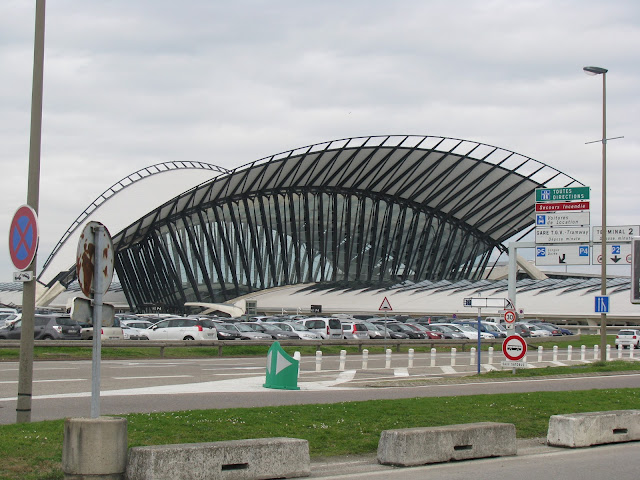 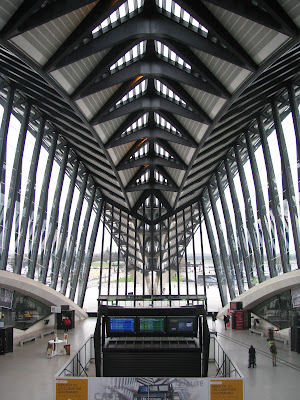 Back to the terminal after a short night. Security was easy, boarding from a bus gate, perfectly on time, and into the CRJ1000. It was still dark, so no pictures here, this one already after take-off over the clouds in the morning light: 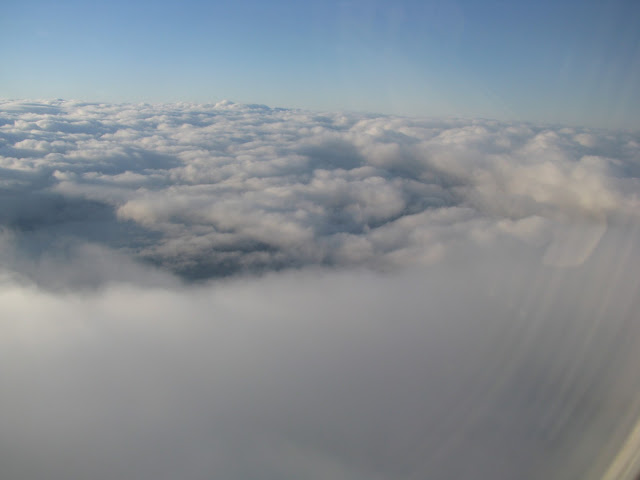 The load was rather light on this flight, probably only about 50% of the seats were occupied, mostly business travellers it seemed. Cabin view in flight: 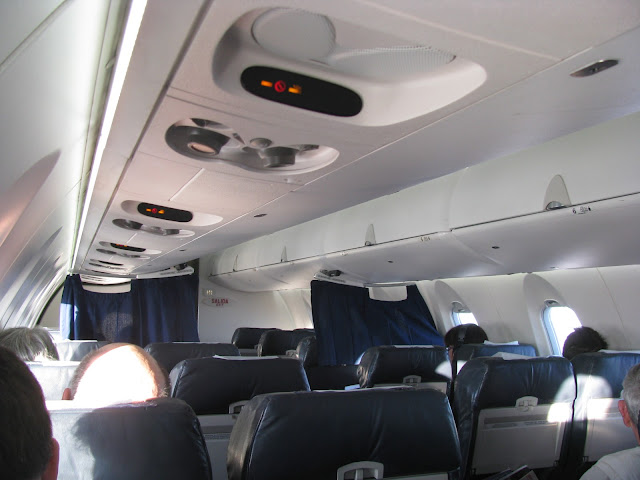 Again not much happened during this flight, it was just a pleasant and smooth morning cruise over Southern France and Spain. Views were great, especially later on the approach into Madrid Barajas:
Chasing our shadow on short final: 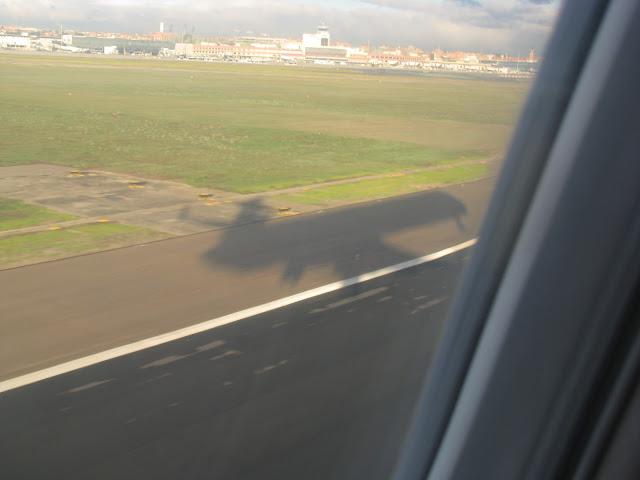 And back on the ground. On the way to the stand at Terminal 4, home of Iberia here:
And a final picture of the sleek looking CRJ1000 after disembarking: 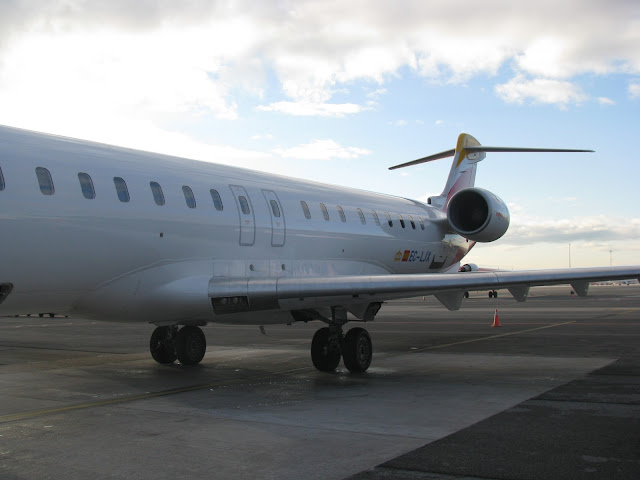 Now I had more than 5 hours to wait til my next flight. Originally the timings were much better, but the LYS-MAD flight got a schedule change to depart 3 hours earlier. Well, that's life I guess. I wasn't in the mood to go into Madrid though so I just spent the time hanging around at the airport, reading and relaxing. Architecture-wise this terminal here is always impressive but besides there's not much to do here: 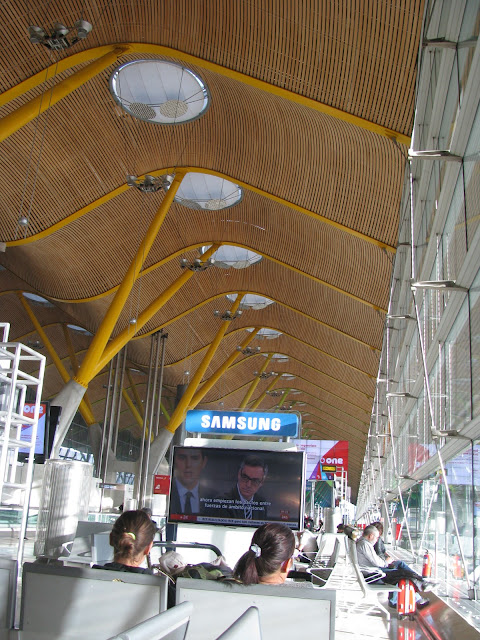 Let's first check the FIDS, all looks good for my next flight: 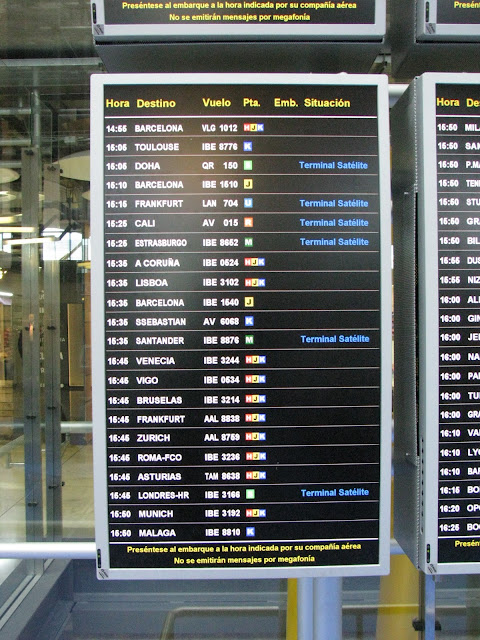 The flight to London would depart from the Non-Schengen satellite part of the terminal. So with the underground train to the other terminal, through passport control and to the gate. And I was happy to see that the flight would indeed be operated by the A330, always fun to have a widebody on a short-haul flight. Here it is, appropriatly named 'Madrid': 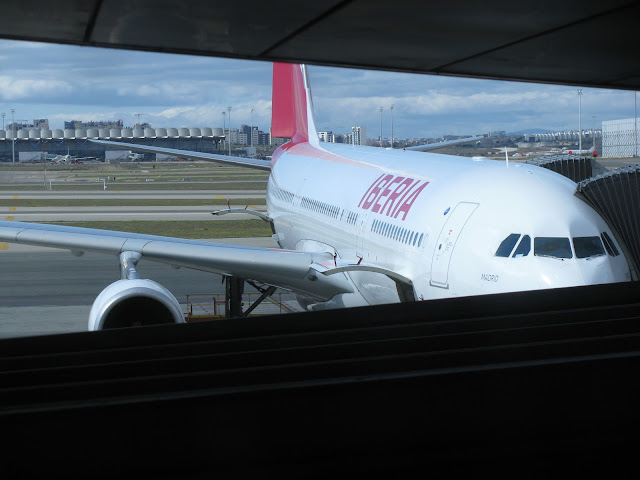 Registered as EC-LZX and built in 2014, so less than two years old by the time of the flight. Again everything on time, boarding started, just a little bit chaotic. I entered the plane, got a friendly greeting by the flight attendant and settled down on 14A. View from the seat, towards the main terminal and to another smaller Iberia airbus in classical colors:
Cabin view, load was pretty good: 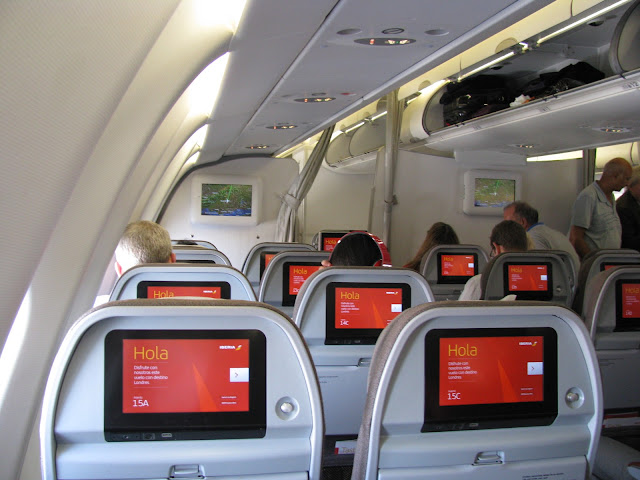 And up in the air: 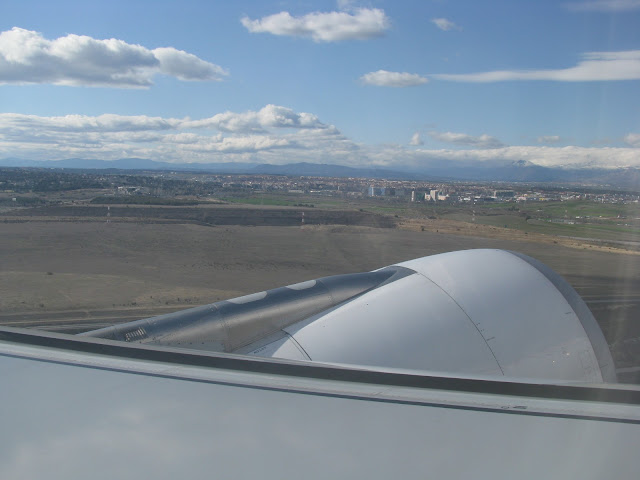 Nice views again, at least at the beginning of the flight over the still snow covered mountains. Later it was getting more cloudy again:
I played around with the inflight entertainment system, but, needless to say, I mostly had it on the most interesting page, the airshow: 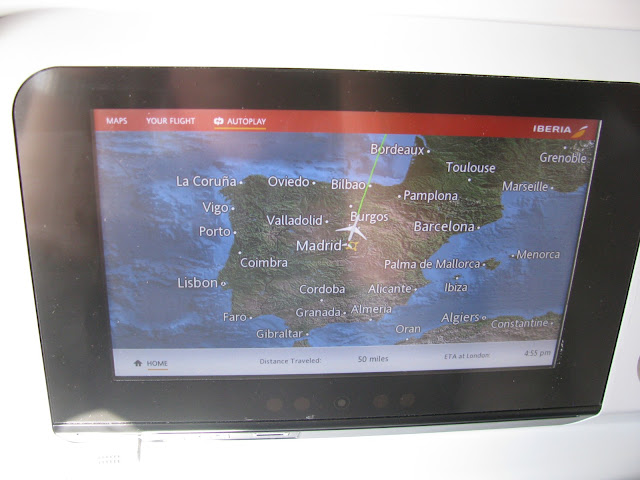 There was actually some service on this flight, didn't really expect this, but we all got something to drink and a free ham-and-cheese-sandwich on board (!!!), yeah: 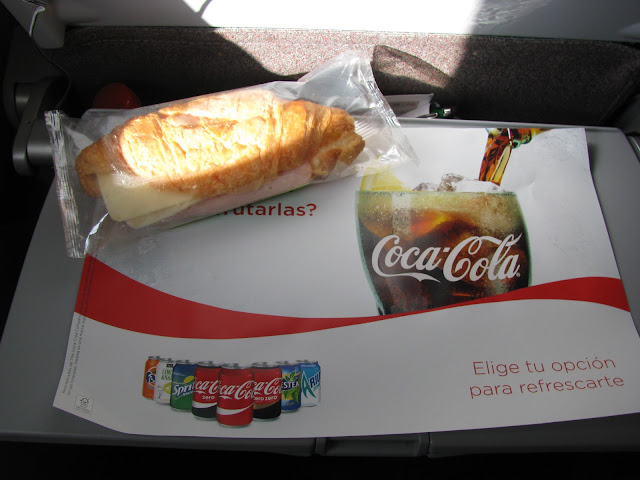 Descent started then after a smooth cruise over Spain, the Gulf of Biscaya and France. Got a nice air-to-air picture of this big Emirates Airbus that probably had just departed Heathrow on its way to Dubai: 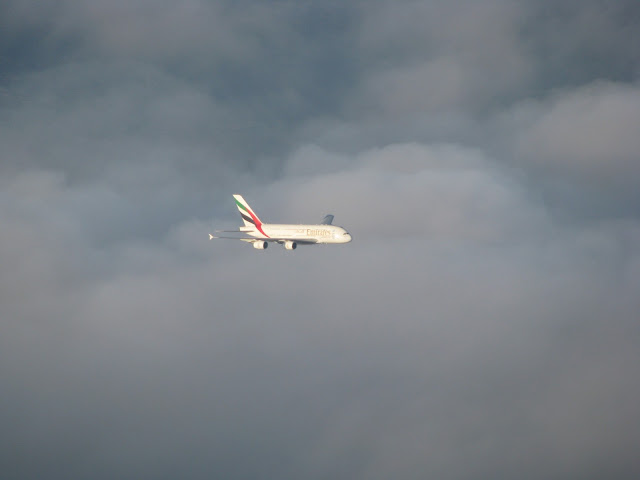 Visibility was quite poor, but I you look closely you can just see the Shard in downtown London through the clouds: 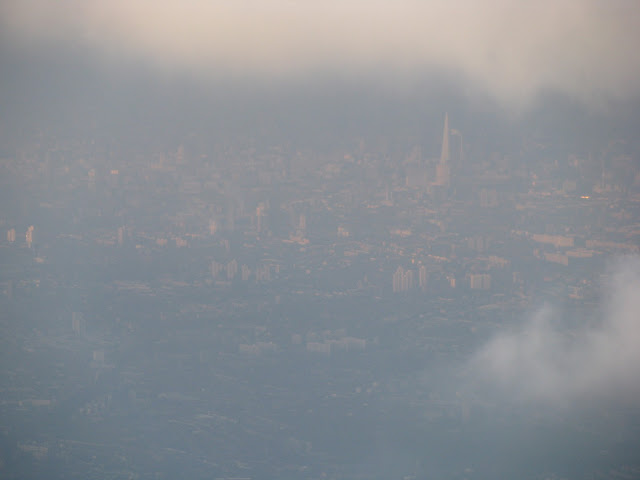 Approaching Heathrow in the evening light:
And touching down on runway 27L: 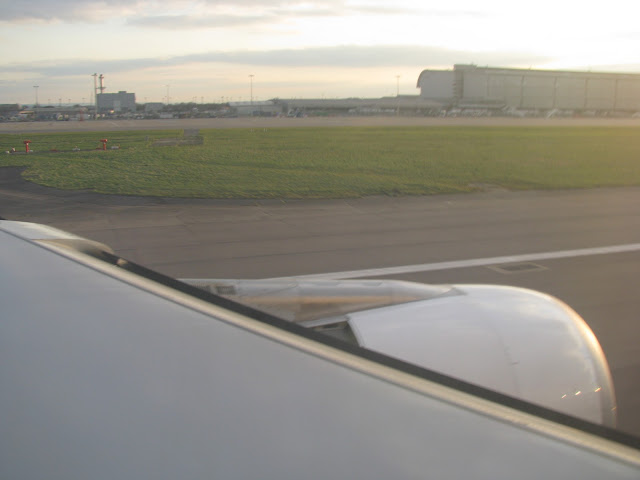 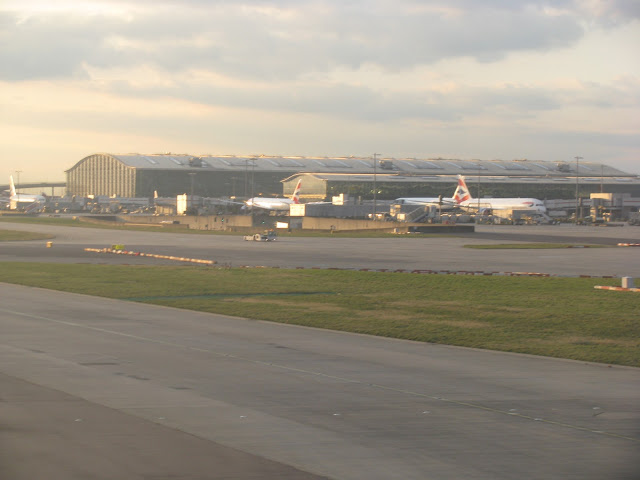 Until coming to a final stop next to this Airbus 380: 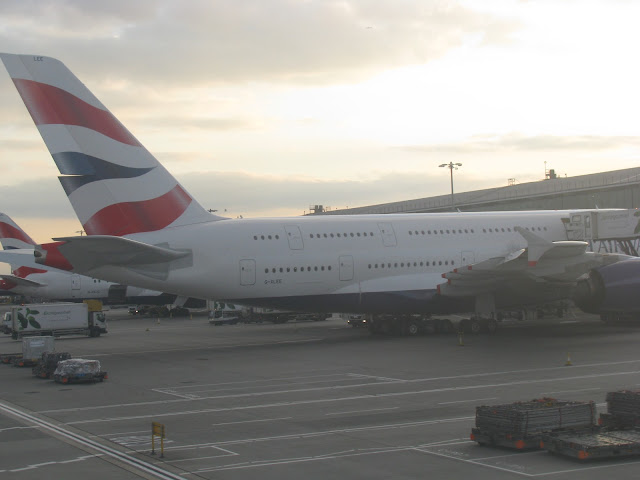 This was also a nice sign for things to come up later on this journey. And a good point to finish this first part of the trip report. So far it was a good start to the trip, three legs done, all went well, with the highlight so far the Iberia A330.

Now stay tuned for more, the next part will be about the first long-haul sector of this journey, the flight to Kuala Lumpur on the Boeing 787-9 and a few pictures of the Malaysian capital.