After another tasty breakfast by the pool I met again with driver Made, who took me on a wonderful tour around the island the day before, for the ride back to the airport. And after around 40 minutes on the road through some heavy and chaotic traffic we arrived at the terminal, which looks pretty nice: 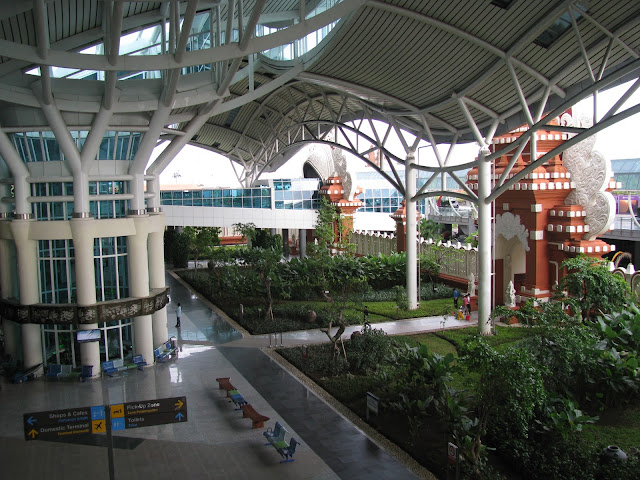 Into the building then, through security and passport control and into the departure area, from where you have good views on the apron, with a few interesting and exotic airlines (well, at least from a European viewpoint) :

A little later I spotted my ride arriving on the runway, an airbus A320 as planned. Registered as 9V-TAO, first flight in 2010, one of 46 planes of this type in the fleet. The tiger has landed: 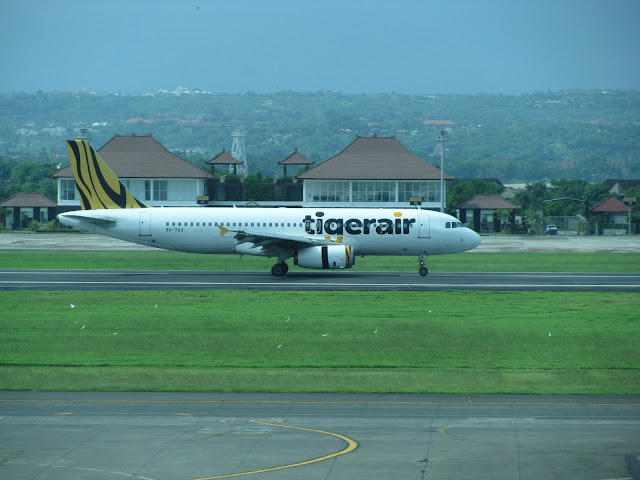 On board then, with an almost full flight it took a while, but still we managed an ontime departure. Next to us a Garuda A330: 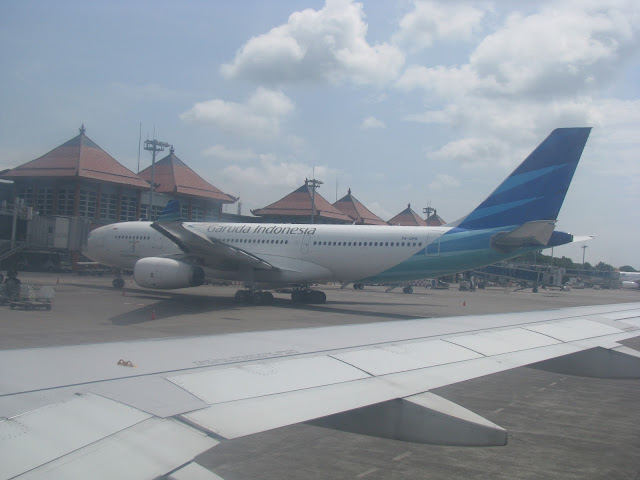 Not a long taxi time to the runway, then the throttles were moved forward and up into the air we went: 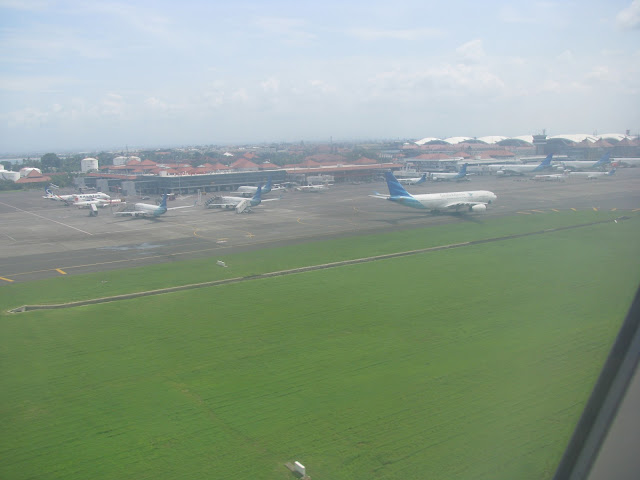 And over the ocean: 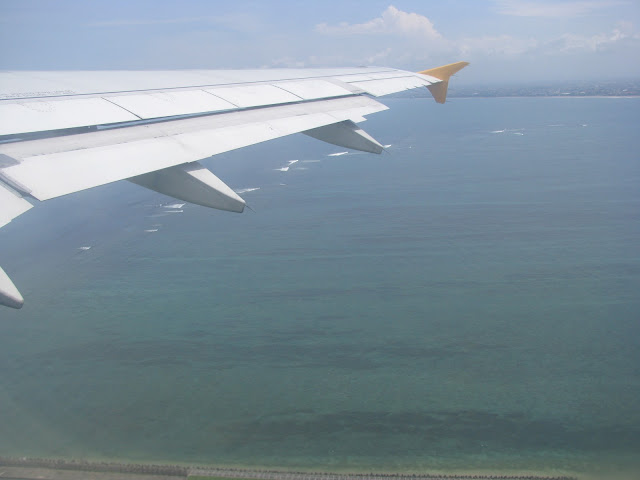 It was a bit hazy and cloudy at first, so the views weren't that good, still I managed to get a few nice pictures:

Now tigerair is basically just an ordinary low-cost-carrier, so there was not much going on during the flight. There was of course a buy-on-board run, the crew was mostly friendly and professional. I decided to get a small snack and an orange juice: 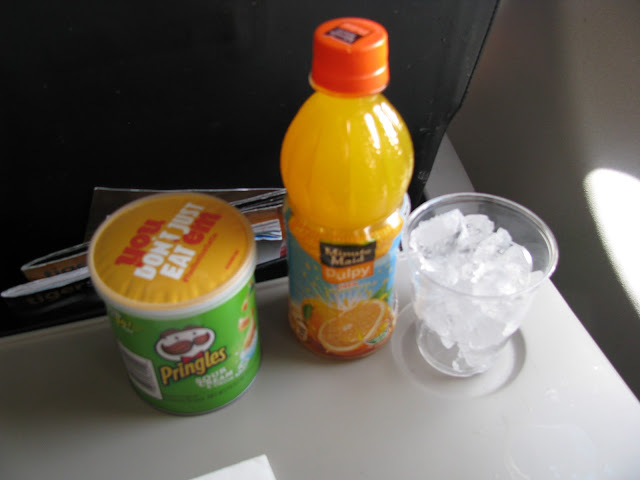 Approach into Changi airport then was pretty scenic over the islands and over the strait of Singapore with just thousands of big ships. This is Bandar Udara airport on the Indonesian island of Batam: 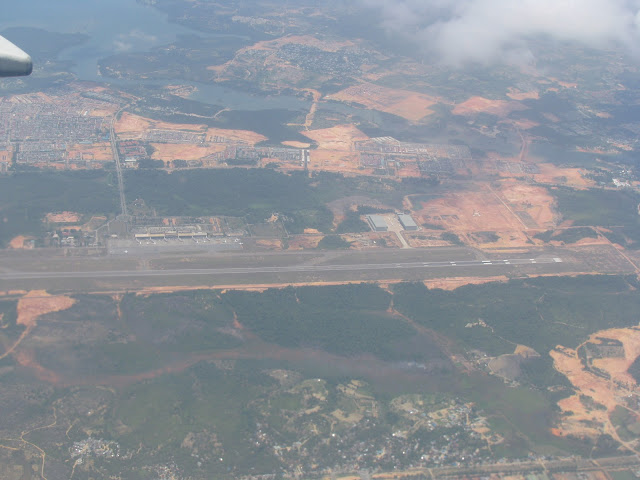 And on finals for runway 02L over the golf course: 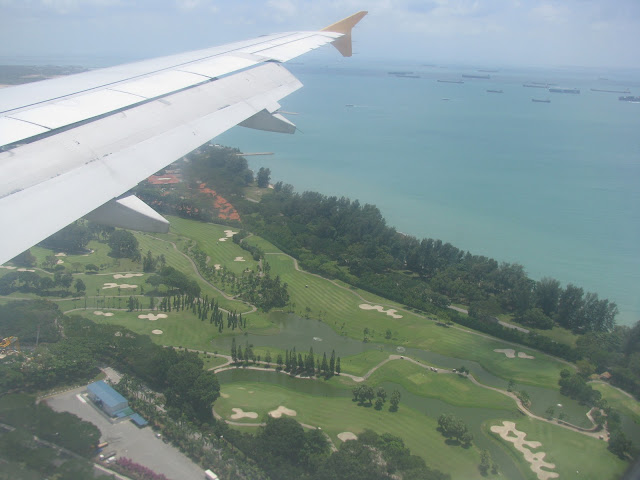 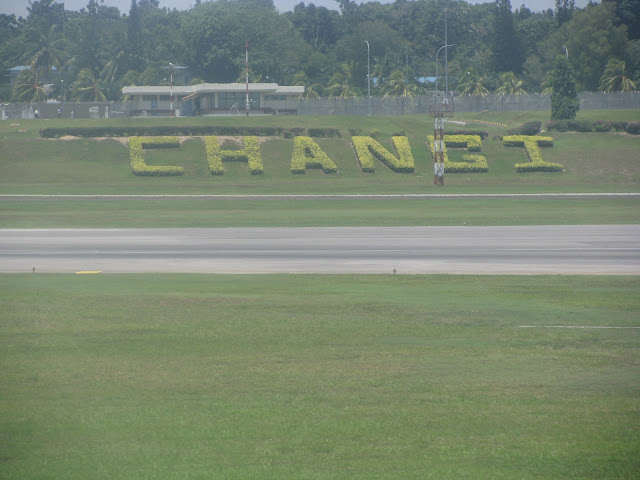 It was quite a long taxi towards the gate, on the way I saw this great big Singapore Airlines bird: 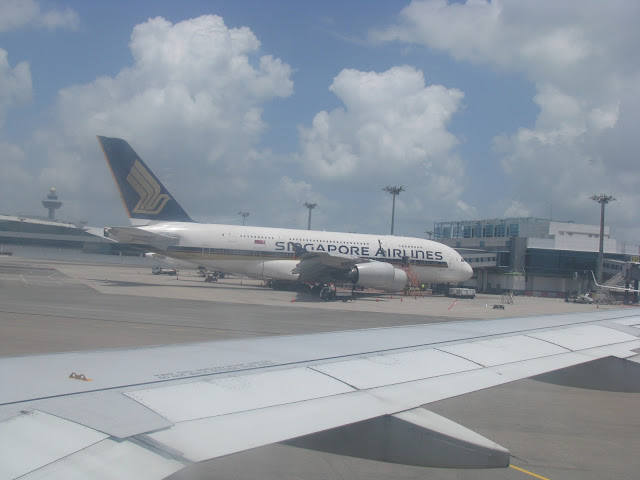 Finally at the gate, I bid farewell to the crew and into Change airport. Immigration took a while, there was quite a long line, despite all the counters being open. But made it through eventually and hopped into the train towards the city.

I had booked a hotel in the Geylang area, pretty cheap, but right in the middle of the red light district. No problem, it is Singapore after all, the action was well hidden behind closed doors. My room was quite small and simple, but there was a clean bed and a shower, so what do you need more?
And the view out of the room was quite interesting: 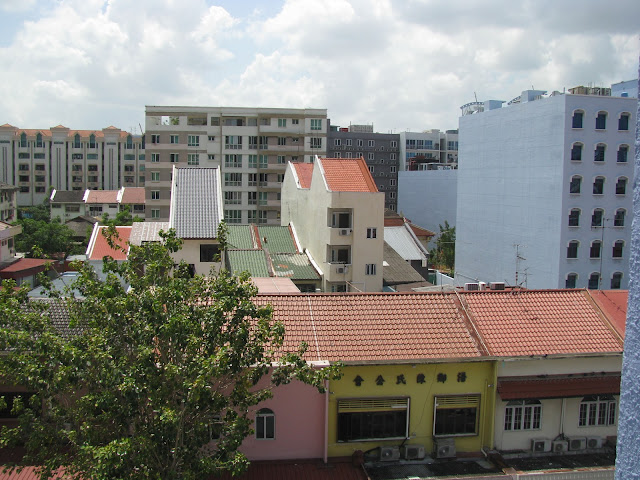 Into the city centre with the Metro next. The main downtown district is the area around the inner harbour, or the Marina Bay, everything neat and clean and quite impressive, just as you would expect from Singapore:

Lot's of restaurants around here as well: 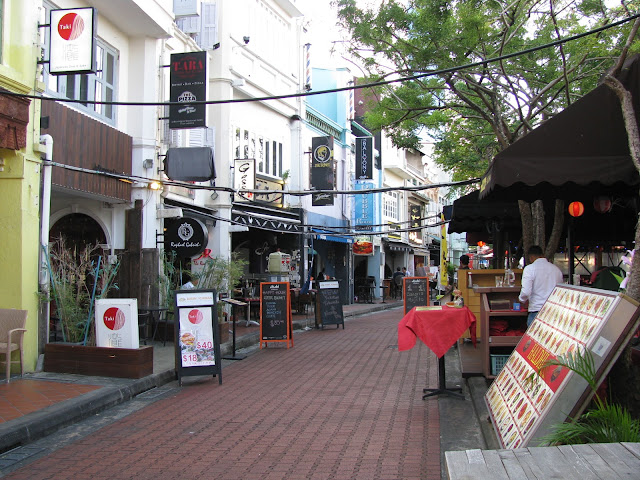 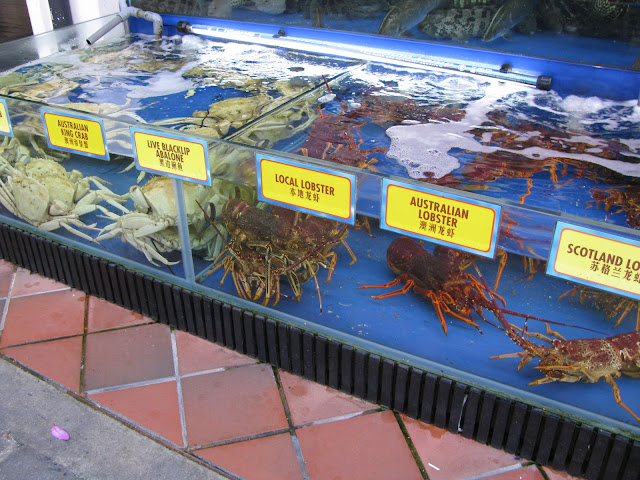 A statue of Sir Thomas Stamford Raffles, founder of the city: 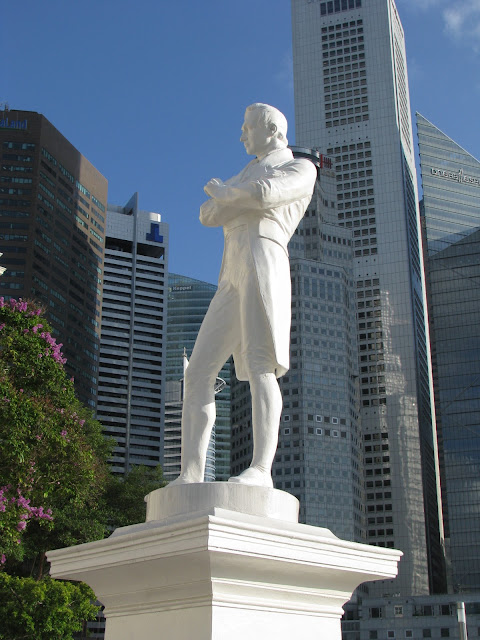 Then I continued towards one of the most famous hotels in the world, the Marina Bay Sands Hotel, what a fantastic building: 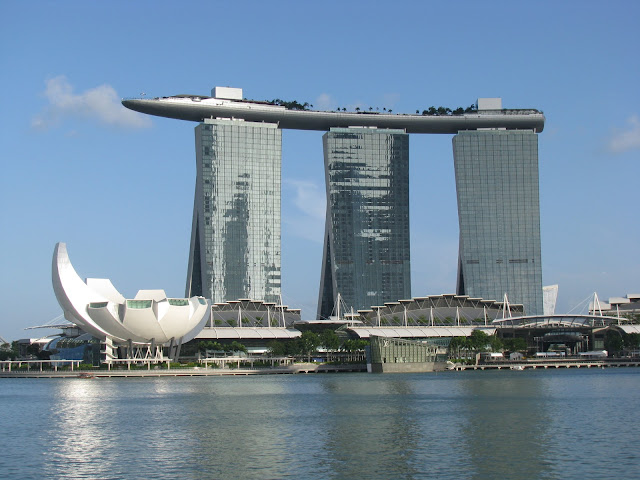 And the Merlion, with a lion's head and a body of a fish, the mascot of Singapore, symbolising  strength and a connection to the sea: 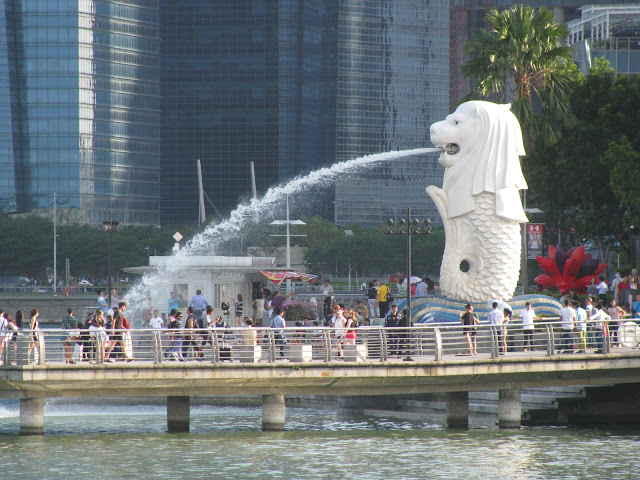 Behind the Sands Hotel are the Gardens by the Bay, famous for the Supertree Grove, an area with giant tree like steel statues. Greatly illuminated at night: 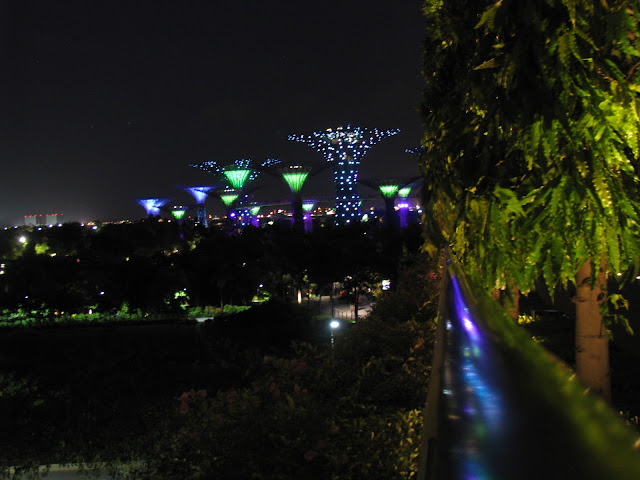 The next day I decided to visit the more older part of the city and the area around Chinatown:

My personal highlight in this area was the Buddha Tooth Relic temple, a big Buddhist temple that houses an old tooth of Buddha: 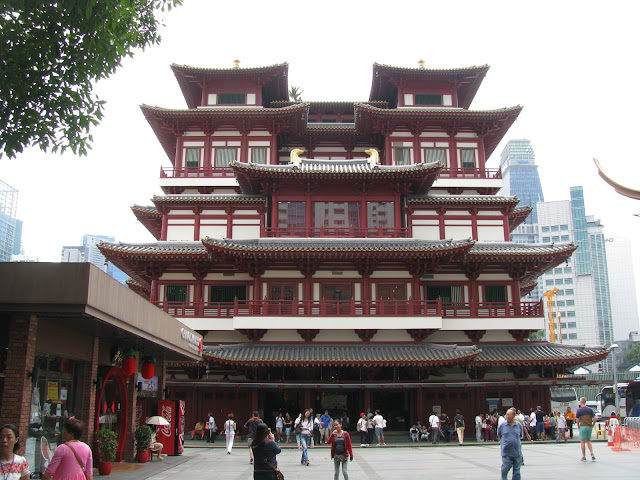 Inside there are a lot of big statues: 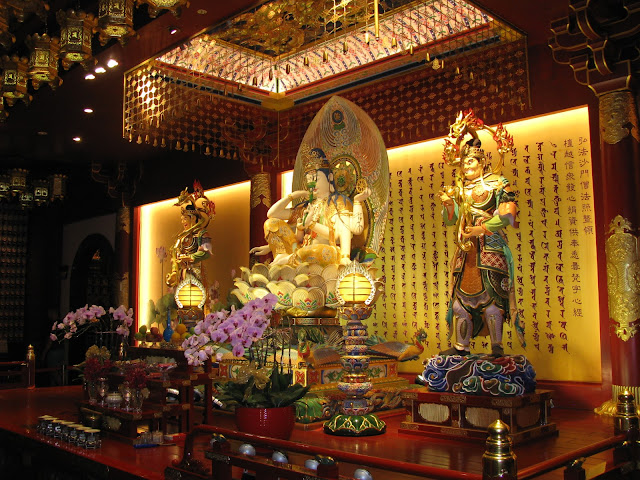 But then there are also just thousands of very small statues of Buddha alongside all the walls: 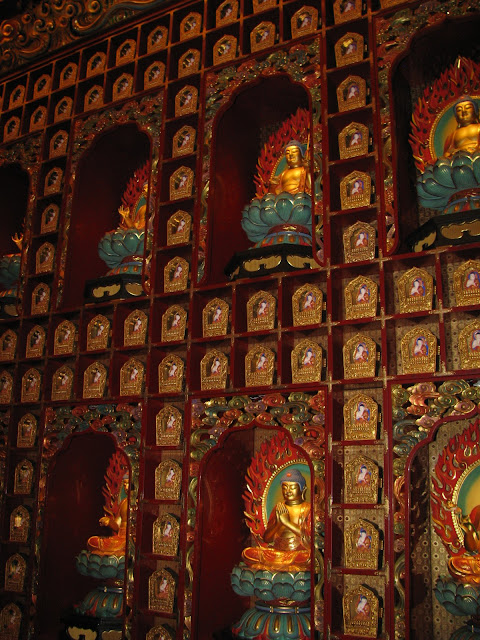 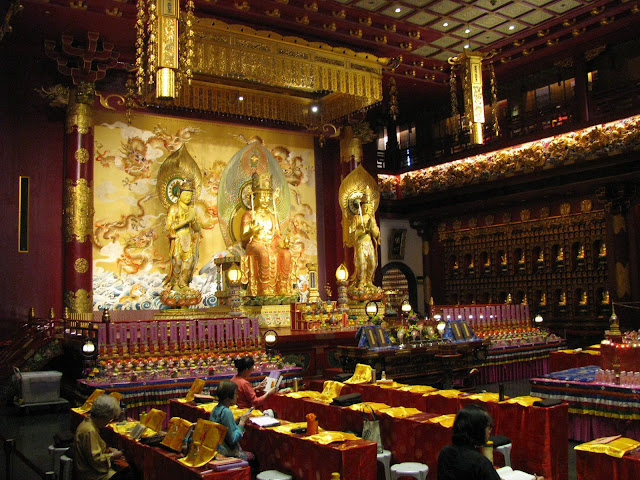 For lunch I went then to the Maxwell Food Centre, one of the many hawker centres in the city, with just hundreds and hundreds of food stalls:
Most difficult thing here is to decide what to eat. Finally I settled for a noodle soup with chicken and shrimps and a healthy dose of hot chilies. It might lack on presentation, but it was delicious: 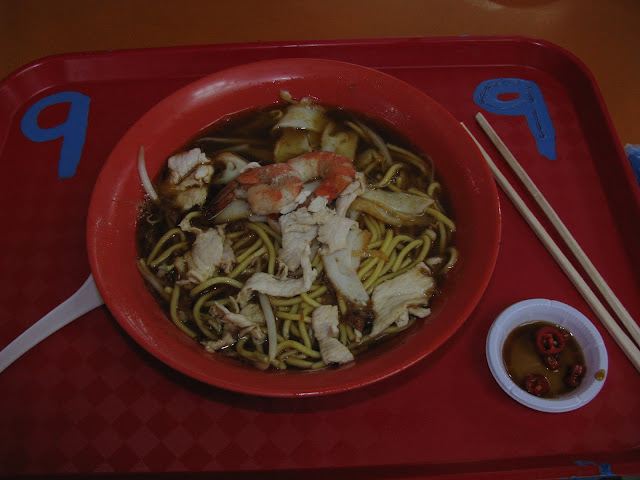 For the afternoon then I wanted to take a tour in the Singapore Flyer, with a height of 165m one of the tallest ferris wheels in the world: 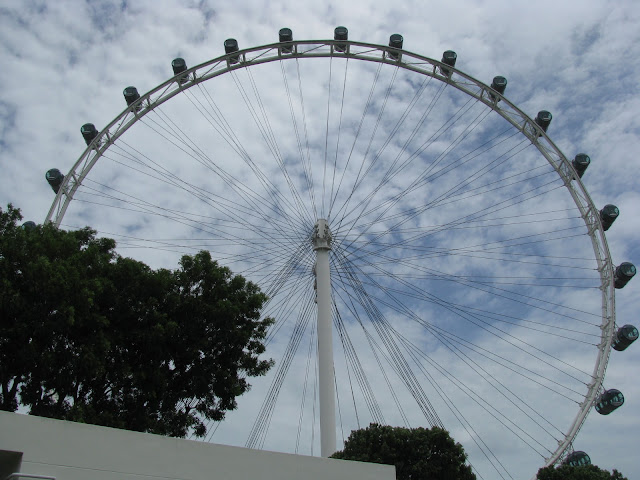 The entrance station with one of the 28 capsules: 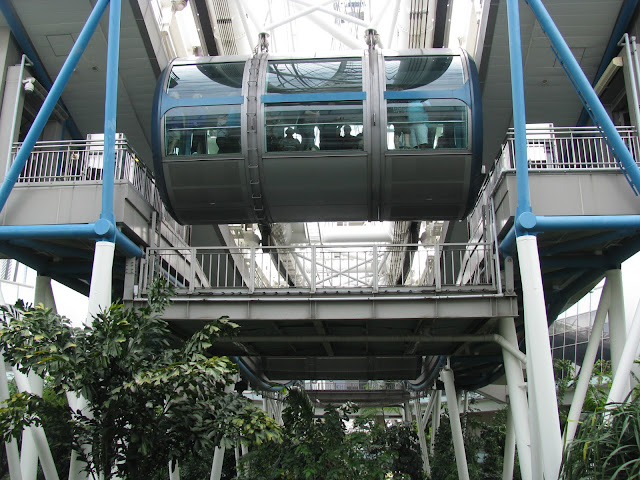 Since it wasn't too busy that day I was lucky to have one capsule all to myself. Needless to say that the views were stunning:

And after this I was tired enough to head back to the hotel, grab my back and take the Metro out to the airport again for my return flight to Europe, my first flight in an Airbus A380. But that will be covered in another blog post!