Published by CaptainRed on September 01, 2018

Flying with the low-cost-carriers are usually a good way to get you from one point to another for a reasonable price, to connect the dots in a crazy itinerary, or to get you to a place you would never ever visit otherwise, but more often than not they aren't really that exciting and certainly not worth to write a blog post about.

But yet somehow even these flights can turn into a memorable experience, and in a very positive way. Like this transavia flight I have done earlier this year from Amsterdam down to Naples in Italy. It was part of a longer aviation lovers journey through Europe with many more flights, but I think this one was the most memorable of them, so let me tell you more about it.

From Amsterdam to Napoli

A pretty early departure, something I usually don't like, but well, sometimes you just cannot avoid it. I had spent the night in a small hotel near the airport and the shuttle took me to Schiphol after a way too early wake-up call. After security and a much needed coffee I was treated with this atmospheric view, the new day was dawning, the plane still covered in frost, patches of fog in the distance, well, getting up early has its good sides: 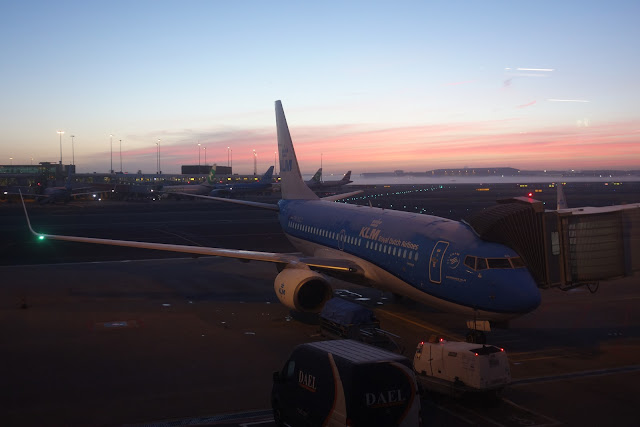 Towards the gate next where my ride for the morning was already parked: 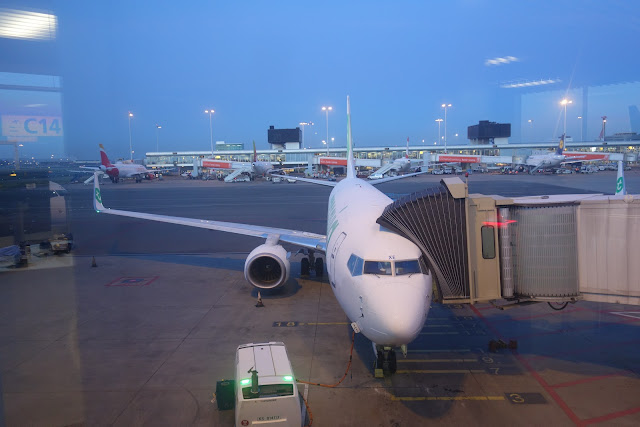 Registered as PH-HXE, less than 2 years old by the time of this flight, one of 31 B737-800s in transavia's fleet. Boarding started a few minutes late, and with a pretty full load it took its time. There also was a big group of Italian travelers on board, and they all knew each other, maybe a big family or so. Took a while for them to store all their belongings, hey, one lady even brought a big balloon, the kind shaped like a bird you often get at the funfairs or so. Well, finally I arrived at my window seat and settled down: 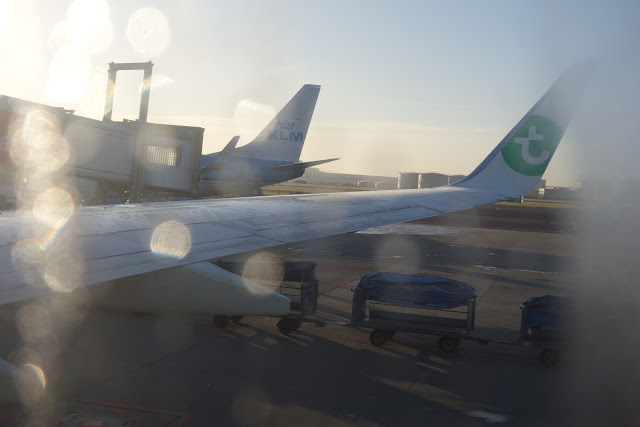 A short welcome announcement by the Captain and we were on our way. But not towards the runway, no, it was such a cold morning that a deicing was necessary, it has been a while since I experienced one:

After this was done and the plane freed from all the ice and frost, and after a long taxi to the infamous Polderbaan it was finally our turn for take-off: 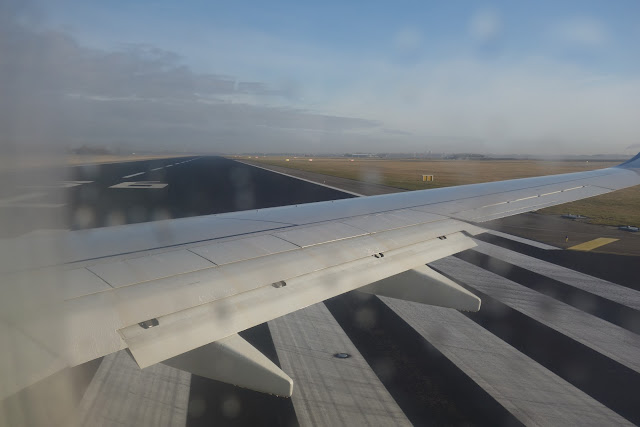 And up into the crisp cool morning sunshine: 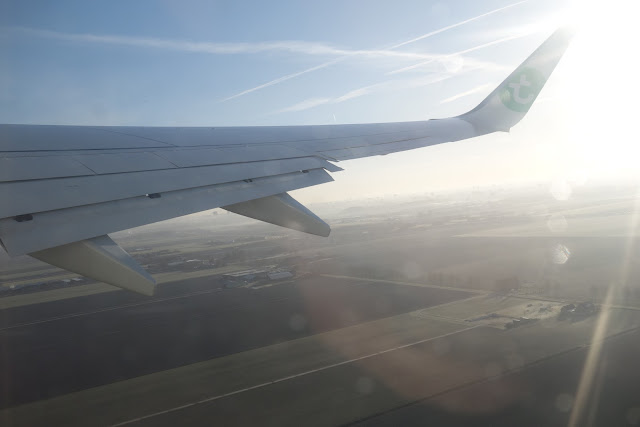 Departure route took us in a wide circle around the city of Amsterdam, awesome views over the city:

More cool views on the way, I guess there are some powerplants below the layer of fog here: 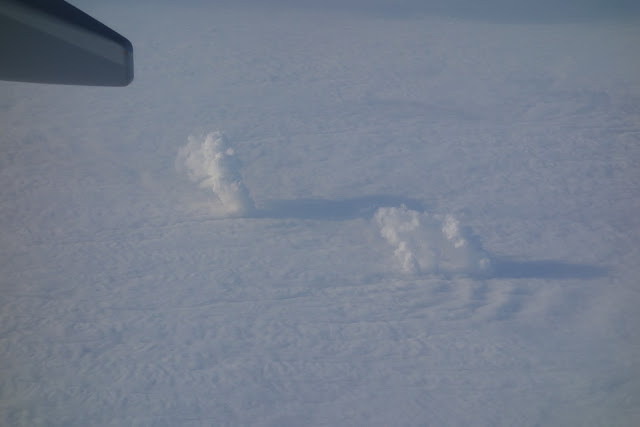 And the airport of Cologne: 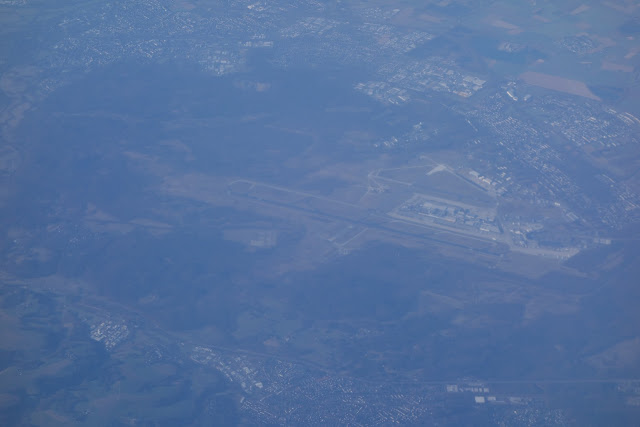 I was hoping to get a view over my home city on the way and I wasn't dissapointed, overflying Karlsruhe: 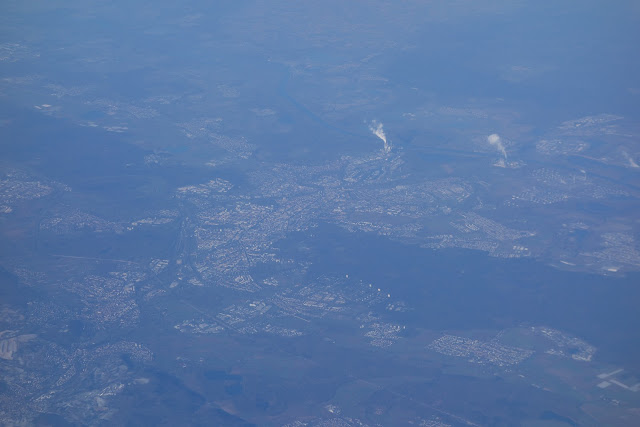 Next highlight then the crossing of the Alps. Even though I have done this countless of times, I will never get tired of these amazing views:

From this point on we flew along the Italian peninsula down to Naples. Meanwhile the crew came around with the buy-on-board service, but I didn't bother with it. And the Italian group were getting more and more louder as we came closer to the destination, I never thought it's possible to talk to each other in an airplane when sitting like 6 or 7 rows apart. It certainly added to the atmosphere on board 😉

Approach into Napoli was quite spectacular, first along the coast, then over the city:

And touching down on a still wet runway. Mount Vesuvio is in the distance, unfortunately still in the clouds: 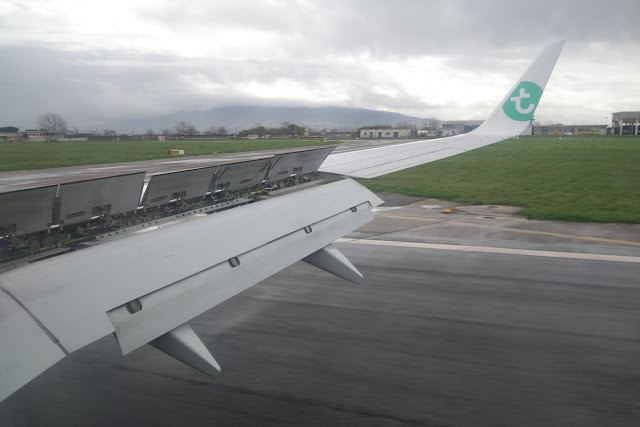 We arrived at the gate shortly after, in total almost one hour late because of the slightly late departure in Amsterdam and the deicing. But no problem, I had a long layover here anyway and it was a fun flight. A last picture of the plane, from under the wing, you know: 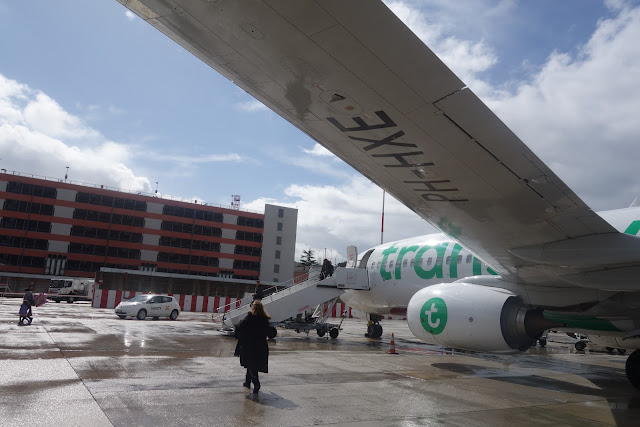 I had enough time here for a short visit to the city. There is a convenient bus transfer and since the airport is pretty close to the center it didn't take long. The view back to the terminal building: 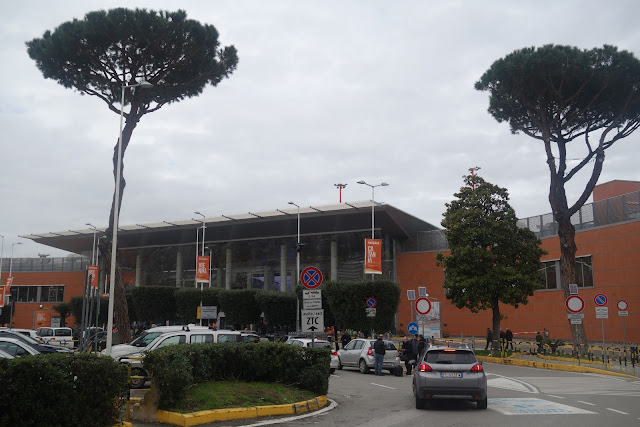 Now Naples certainly is a city with a special charme. I wandered around mainly in the old town and what mostly impressed me were the contrasts here. Some buildings and alleys were really rundown but then in between a well-maintained gourgeous grand palace or a big church. And all in a bustly and lively atmosphere. Let me show you some pictures:

Naples is considered to be the birthplace of my favorite food and so it was a no-brainer for me to have a pizza here. The L'antica Pizzeria da Michele is said to serve one of the best pizzas in the world, hard to believe since the place looked so unpretentious from the outside: 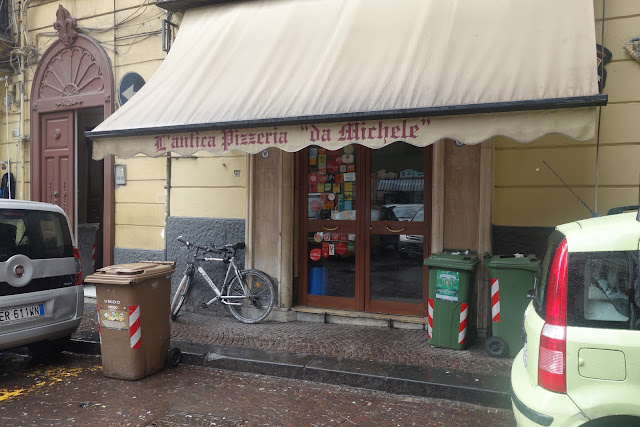 It didn't look better from the inside either, at least they had a big wood fire oven for the pizzas. But the place was packed, I arrived there at 11:30, shortly after they opened and I already had to wait for a table. Not much choice on the menu, only the two classics, the Margherita and the Marinara. Took a Margherita, and oh yeah... this was truly a heavenly thing, simple and basic, high quality ingredients, masterfully put together and baked. Yummy, yummy, yummy: 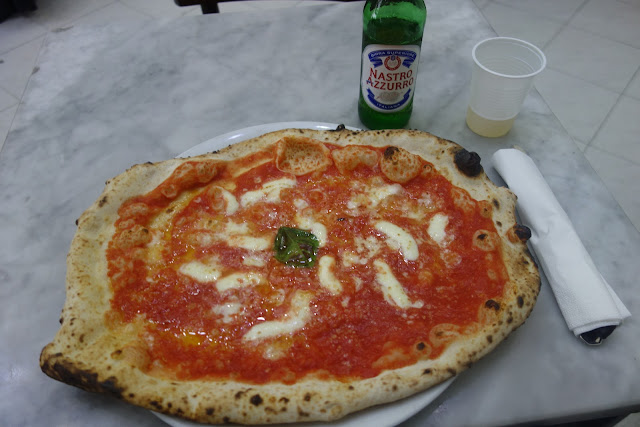 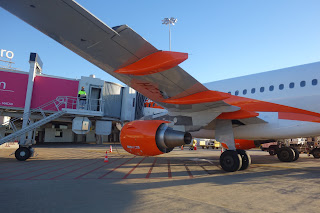